Guys! Guys. I made a spoon. 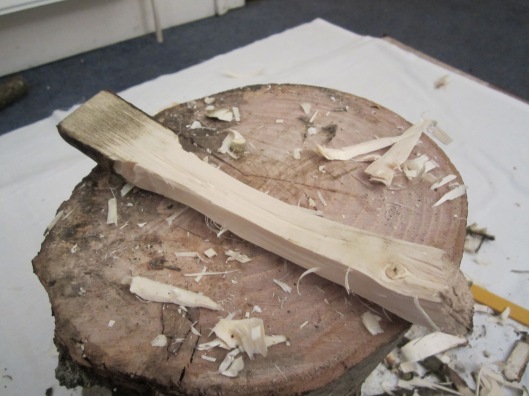 Reluctant to sacrifice the nice, big pieces on what would probably be a fruitless endeavor, I started with a rather small branch.

I’ve never needed to use an axe with that much precision before. It’s hard. But don’t worry, my fingers were never in any danger. Which, frankly, is probably why it was so hard–there’s no convenient place to hold on to.

It’s also very hard to get a hook knife into a very small bowl. But I did. 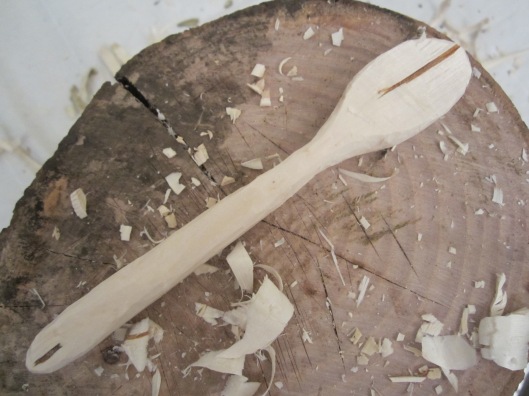 But my next spoon will be somewhat bigger.

NTS came home to find me sitting on a dropcloth on the living room floor, surrounded by wood shavings and whittling away. Not as scary as Sunday, when he came home from the store just as I was fitting the blade guard to the saw blade, but possibly unexpected. But realistically, the living room is the only room large enough to use a hand axe. (Why do you need an axe to make a spoon? To remove large pieces of wood, like the extra width around the handle, much more quickly than you can with a knife. This article about Barn the Spoon has an excellent video for illustration.) 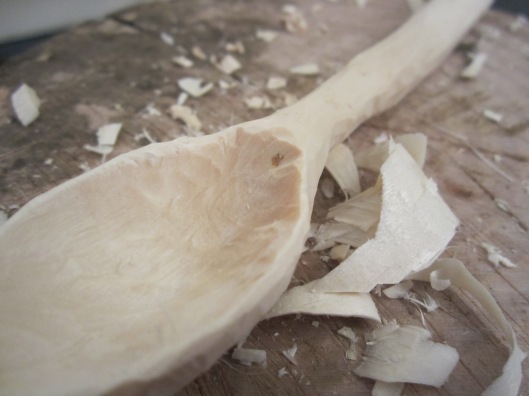 Spoon carving is highly addictive. My biggest difficulty so far is knowing when to stop: when I can actually make the spoon smoother, and when it’s just done. Now to make some wood butter…

We saw some picturesque stone houses in the village by Bolton Castle.

In fact, that entire section of Yorkshire seems to consist of nothing but violently rolling dales and houses made of old grey stone (and sometimes flowers).

I started to explore the castle. Much of it had been closed off when were were there in February, and it turned out that the castle was much bigger than I had realized. About four times as large, really, as the on intact section was mirrored by three now-defunct towers, all facing on a courtyard. 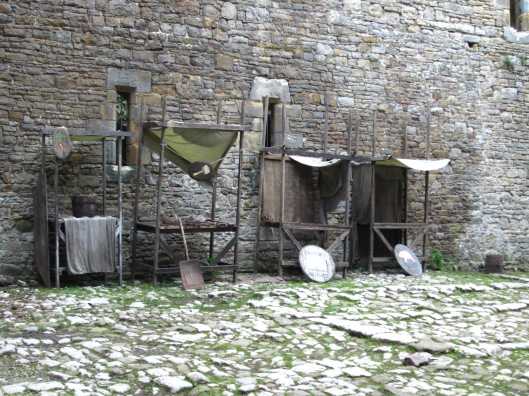 Before I could explore thoroughly, however, I got distracted by the forge. I was drafted as a blacksmith’s apprentice. I have always been fascinated by blacksmithery at living history museums like Sturbridge, Colonial Williamsburg and Leonards Mills. (Never heard of that one, have you? It’s a pioneer outpost in Maine with a working stream-powered sawmill. Daddy used to do axe demonstrations, and occasionally I helped. Nothing like peeling logs on a Saturday afternoon in the fall.) The smiths are understandably reluctant to hand over tools and yellow-hot iron to members of the public, though, so I’d never gotten my hands dirty before.

But this time I wasn’t a member of the public, and my hands got dirty, sweaty, and before I got the knack of the hammer, slightly bloody. It was a good day. 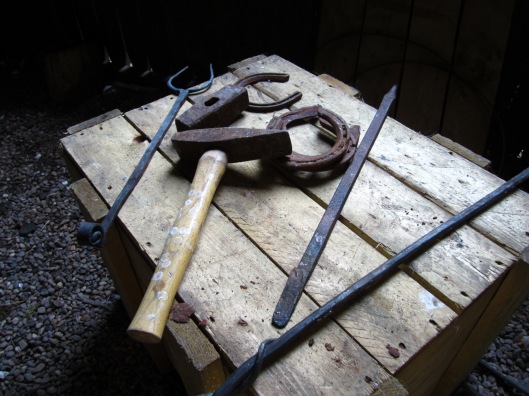 It’s tiring work, but very satisfying in the end. It also goes a lot faster once you get the knack of using the hammer correctly. Needless to say, I hadn’t, but I did improve toward the end. 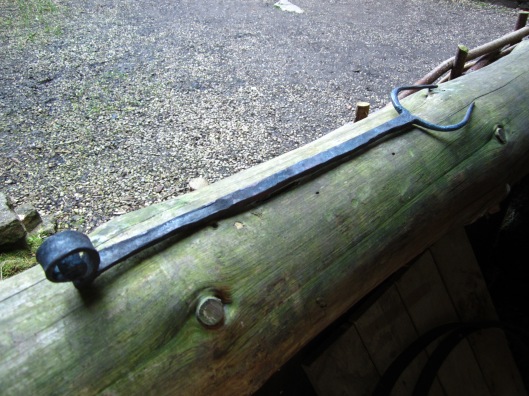 I helped make these. Not just pumping the bellows, either. Among other things, I did the twisty handle on the end of the fire rake. It was a lot easier to manage the forge fire once we had finished that.

I have now found a re-enactment hobby even less portable or convenient than wood carving or basketry. 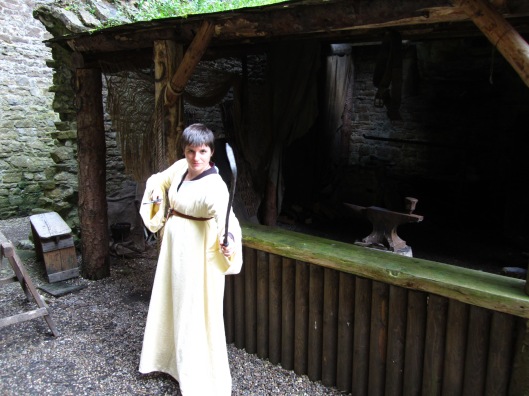 Today, I am Not Dead, efforts of the chill this weekend to the contrary notwithstanding. Because we spent this past weekend at A Castle.

The very idea thrills my little American heart to bits. Castles are thin on the ground in the US, even in the east, being limited to importations and follies. (We do have some rather brilliant forts, though, especially along the coast.)

This weekend, we stayed and slept in Castle Bolton, in Yorkshire. Everything James Herriot ever wrote about the wind in the Yorkshire Dales appears to be 100% true. I was thankful for my tightly-woven cloak and capacious hood. Incidentally, I discovered that by pinning my hood to the same band I pin my veil to, I can keep the hood on my head despite the hungry wind. I went into the weekend indignant about the entire idea of wearing a hood so as not to tempt good men. I still object to the idea of it, but these scruples will not prevent me from wearing a veil when it’s cold out because it’s just too darn comfy. I also discovered that I could replace my head band with a warm woolen watch cap and just pin the veil on top without unduly imperilling my historical look.

You may have gathered by now: castles are cold. The main hall was all right (with a few layers of wool and flannel) owing to the immense fire we kept feeding. My layers of scarf, flannel houppelande, muslin shift, heavy flannel kirtle and modern wool long underwear (top and bottoms) even allowed me to go about without a cloak for a while, which was when I realised how heavy my cloak actually was to carry around all day. But the large sleeping chambers had no fires. The nights were cold, cold, cold. Medieval life without the amenities. During howling, rain-drenched gales at night, I discovered that the dips in the stairs were not caused by human feet alone, but by thousands of drops of water running down the spiral staircase from the third floor. On the other hand, the bathrooms had running hot water in working mix taps, which is a step up from most buildings in Scotland.

And in case you missed it the first time: we stayed in a castle. In Mary, Queen of Scots’ bedchamber, according to the plaque on the wall. It’s going to be hard to top that.

The weather here keeps flashing between liquid gold sunshine and hard rain, punctuated by exciting bursts of hail that blow in on tempest winds and, spent, disappear. I blink and the room has gone dark; a cup of tea, and the sun is back, a little lower in the sky.

Ladies, I am bound by the bonds of sisterhood to show you this post about bra sizing. Gentlemen, you can skip to the next paragraph if you like; there are no pictures. In short, it turns out that when you bend over and scoop all of the soft tissue on your chest–the breast tissue–into your bra, there’s a lot more than you might expect or be containing in your current bra. I wasn’t able to get to the shop for a few days after I tried it because I was writing a paper, and it drove me crazy knowing I could be so much more comfortable. Once I finally did make it in, as a reward for finishing up my paper, it was amazing. I have never had particularly much up top, but once I changed sizes, it was like a weight had been taken off. I could tell the weight distribution was finally right. Long story short: 34A –> 32C. Read the article, and just for kicks, try it out some time when you’re in the mall. It might be really worth it. I’m not saying big breasts are necessary for a woman, but being fully supported is so much more comfortable. Now I just need to build up a new collection of brightly colored bras. 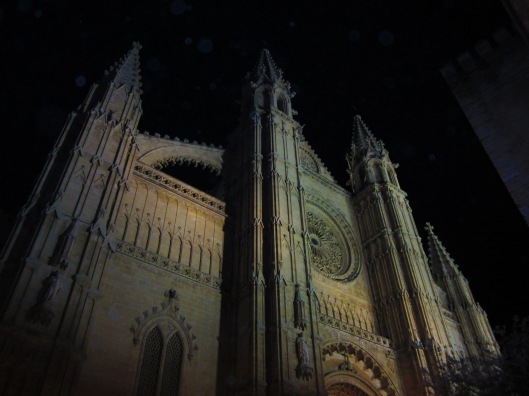 Tomorrow we’re off to our first [hopefully] outdoor reenactment* of the season. Hooray! I will be smart this time and wear my new flannel kirtle instead of the thin one-hour houppelande I made the morning of our very first UK event last fall. I’m probably going to move from a half-developed Anglo-Saxon persona and costume to a more Scandinavian one, maybe Icelandic or Danelaw, but we’ll see. Sewing costumes has not been high on my priority list lately, though I’ve been exploring some great Viking reenactment sites. Vikingsnitt is my favorite; it’s in Norwegian, but has great pictures. I just have to be careful not to apply any of the linguistic phenomena on the site to my test involving Old Norse! That’s the danger of linguistics. You can’t escape it. Every holiday is a busman’s holiday. 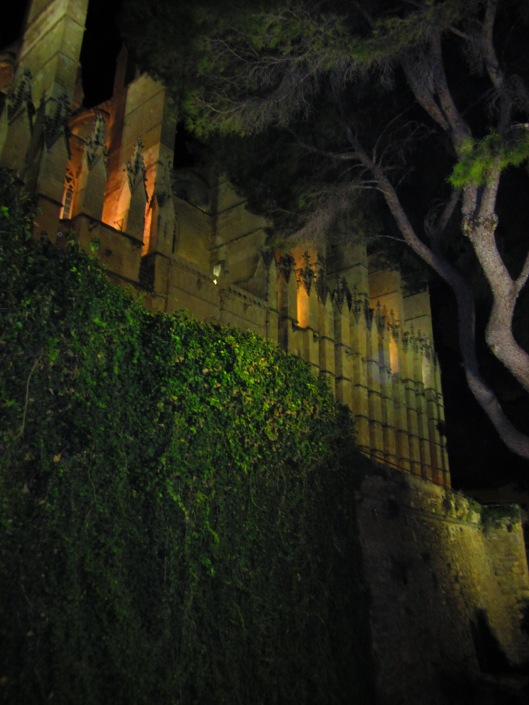 * Some people object to the term reenactment in reference to SCA (Society for Creative Anachronism) events, since we don’t replicate any particular historical event, and the time periods represented cover most of the middle ages and renaissance. I’m not sure I agree, but semantics isn’t my primary motivation in using the term. I like it because it’s immediately understood by non-initiates without derailing the conversation, which as I get older seems more and more worth a little ambiguity in terms.

Do you know what the wonderful thing about resolutions is? They’re like goals: if you aim high enough, even if you don’t achieve the whole shebang, you’ve still done something worth doing. Whereas if you achieve something in one go, you then have to go out and get a new goal.

This weekend, NTS and I trekked out to our first re-enactment event of the year. This was the venue:

And it was snowing. Inside.

I don’t like to post pictures of other medievalists, as getting permission was pretty low on my to-do list, but we looked great. And by ‘we’, I mean everyone else–I had underestimated the sheer amount of coldness a stone building can trap (it was a lovely warm day outside) and ended up wearing my polar fleece under my zip-up polar fleece jacket under my period garb. I had just finished a lovely warm flannelette kirtle, too, but I left it at home for fear of overheating. The joke was definitely on me.

My interest in reenactment re-kindled after a few months of inactivity, I set out to do some research when I got home. I’m pretty well-versed in medieval English women’s wear, so I thought I might try my hand at something else; Irish or perhaps Welsh garb.

It turns out that researching medieval garb really entails research on two eras: the medieval period and the late nineties, when all of the websites seem to have been compiled. It looks (to no one’s surprise) like hobbyists put their passions on the internet early on and see no need update their CSS (website formatting). It takes me back to the heady days of my young teen-hood, researching medieval and renaissance clothing and playing with my mom’s metal sewing machine.

Also, fun fact? Old English didn’t have ‘Ye Olde’ anything. The ‘th’ sound in the definite article that became ‘the’ was often written with the character wynn (below).

And now you have a great fact for your next medieval-themed cocktail party. Which, if you know me in person, is bound to occur soon. It may also stop you getting punched in the face while joking with a medievalist who’s in his cups.

High Above the Tag Clouds